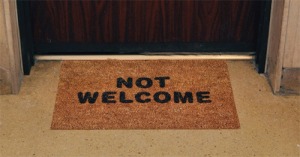 Even after two thousand years of attempting to adjust to Matthew, Mark, Luke, and John, it would seem the Church still finds the literal life and ministry of Jesus Christ too extreme to follow (or even teach).

Initially, none of the following may sound too radical— But strip your mind of the fairy tale-type mentalities that surround these instances. Imagine these literally happening today—-in your church on a Sunday morning. What I think you will realize is that when we remove centuries of caked on commentary, and religious jargon, it quickly becomes apparent that there is little place for the Jesus of the Gospels in our churches. In many ways, He was and is everything the modern Christian disdains.

1. He both taught, and demonstrated speaking to inanimate objects to make them obey you (Matt 21:20-21).

Theologians can explain it away all day (and they do). If there were any doubt about what Jesus was referring to when He told His disciples to talk to mountains, the preceeding verses remove it. When read in context, we see Jesus had just spoken to a real tree, and says “not only will you be able to do what was done to the tree but if you say to this mountain . . . “

The idea of not receiving what you ask in prayer is completely foreign to the life and teachings of Jesus.

He also rejected weird religious idioms that still surround the concepts of prayer today. Such as the Monkey’s Paw Mentality that claims if you ask God for something, you can never truly be sure what to expect (Matt 7:8-11).

3. He made, “cruel and heartless” statements in times of tragedy that connected sin to physical calamity (Luke 13:4-5).

Jesus uses a recent accident in which 18 people were killed by a falling tower, and warned that unless there was repentance, more would perish. Young’s Literal Translation says they would perish in like manner.  He also told a man who had been crippled for 38 years to stop sinning otherwise a worse thing would happen to him (John 5:14).

A man’s son is suffering from seizures. The disciples try, but are unable to help him. Upon seeing this, Jesus could have said something like, “It’s okay guys, you’re only human. I shouldn’t expect so much from you. The reason it didn’t work was because it was all part of God’s sovereign plan. He has decided to use the suffering of this child for His glory.“—Let’s be honest—- if it were 21st century jesus, that’s what it would have sounded like.

Instead of such comforting strokes that we so often hear in times of hopelessness and unanswered prayers, Jesus straight-up rebukes His followers. “You perverse and twisted generation! How long do I have to put up with you!?” (punctuation added).

In a world where God and Satan have apparently switched jobs (now a days God is blamed for sickness and disease and miracles of healing are often attributed to Satan) this would not go over well. And it wouldn’t even need to happen on multiple occasions. Just once and someone would catch it on video or audio, and it would be thrown onto YouTube where it would likely be deemed heartless, and ridiculous.

And no, it was not some kind general faith in God as sovereign, or that it’s, “all in His hands.”

It was purposeful, specific faith in the desired outcome. Contrary to popular opinion, Jesus very seldom (and one could argue—never) spoke about faith in God when it came to answered prayers.

On another occasion He even said to a person, “your faith has healed you.”

We don’t even have to guess how such a claim would be received today. I have seen it taught on multiple occasions that, “faith doesn’t heal anyone—Only God can do that” and to believe otherwise is somewhere in the same vein as blasphemy, or idolatry.

Now a days, all of us are trying to downplay asking God for things. Always coming up with reasons why prayers aren’t answered. How He isn’t a, “Cosmic Bellhop” etc etc. . . And yet—–When we actually read the accounts, we see that time and time again, Jesus is teaching us how to get what we need, and even what we desire by prayer. And He does it unabashedly and with great frankness.

Did you know we now have a website complete with a video library and all kinds of other cool stuff? Check it out! https://www.theobjectivebeliever.com/